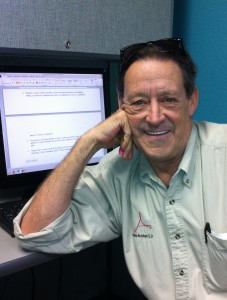 My name is Jim Kenny known in The Jungle as The Ambassador (The Jungle, formerly the country’s largest homeless encampment, was cleared by city officials in December 2014).  I spent in excess of 4 years down there! I was one of thousands in the financial market in Boston and New York that lost their jobs following the financial market meltdown of March 2008.  I found myself in a precarious position when my unemployment ran out.

Having exhausted my unemployment I certainly couldn’t afford an apartment or a motel for any length of time. And then out of the dark there appeared Walmart (tents and such) with “The Jungle” next door. The Lord was on my side! Little did I know when I moved here that Santa Clara County had (and still has) the worst unhoused homeless population of any city in the United States.

As anyone can attest when your homeless, it’s extremely difficult to go on job interviews (which there weren’t any) much less keep clean and keep your head above water mentally.

Since November 2011, I have been able to secure housing for myself and I am in the process of helping other individuals that need housing.

I attended New York University (NYU) with a Major in Finance and Harvard Business School (HBS) continuing education toward a masters.

Currently I am working with the greatest group of people that I have ever met at the Valley Homeless Clinic. I hope some of the homeless will visit the site and meet the wonderful staff and get help.

I am working towards writing a book entitled “The Lost Sheep”.  When it’s finally done, I plan on donating it gratis for anyone interested in the personal day to day lives of the homeless.  The book will help people learn how they can get out of the horrific conundrum in the catastrophe of homeless.

If you want to help financially, contact the SanJoseHomeless.org editor Dr. Angela Bymaster. We would be very grateful.

I intend to add comments and stories as they come up on this blog. Thanks for reading.

SanJoseHomeless.org contributor Jim Kenny lived for more than 4 years in The Jungle (once the largest homeless encampment in the country), where he became known as "The Ambassador". Jim attended New York University (NYU) with a Major in Finance. Jim, who is now housed, uses his experiences to help others find housing.

Drop us a note!